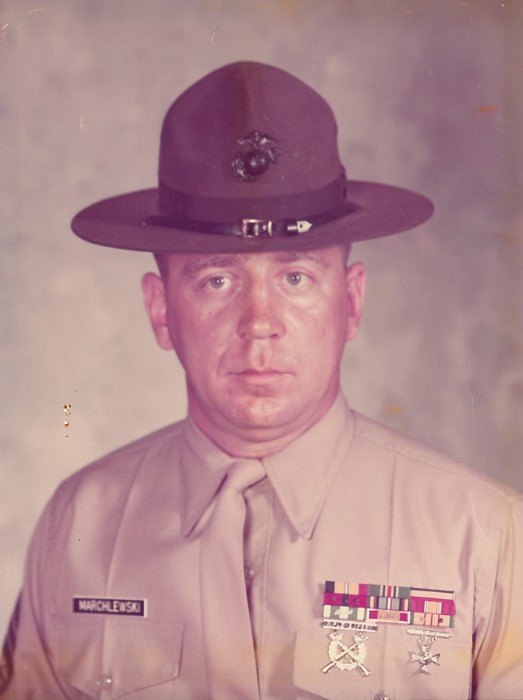 Larry was born on June 7, 1945, in Alpena to the late Leo and Anne (Richey) Marchlewski. At age 13, he worked summers as a fisherman for Shorty Northstrand and as a carpenter. Larry attended St. Mary’s, Lincoln, and Alpena High School.

Larry joined the United States Marine Corps June 1961, retired 1987 and served 48 months in Vietnam from August 1965 to November 1970 in Infantry, Artillery, Special Vehicle Command, Fire & Crash/Rescue Mag #11. He had a very successful and rewarding career and retired as a Gunny/Sgt. E-7. Larry was a recruiter – NCOIC Lower Northern Section of Michigan (5 years), Drill Instructor (4 years), Inspector/Instructor – Uniontown, PA Helicopter Unit (3 years), participated in the Johnstown Flood Relief, and in November 1989 he was called to Military Sea Lift Command as a Merchant Marine in charge of security on a 980 ft. Replenishment Ship TAO 187 USS Henry J. Kaiser. His sailing career ended in 2003 when he became sick with cancer.

Larry lived in Alpena where he worked with the VFW Post #2496 holding the positions of Commander for three years, District #13 Commander for two years, Commander of Honor Guard for 20 years with a total of 53 years working with veterans and the community. In April 1990, he sailed to the Persian Gulf and replenished Navy ships from all allied countries so they could carry out their duties. When not replenishing ships, the crew intercepted and inspected ships going in the gulf for weapons and ammo for the enemy. The crew did so well, they stayed in the Gulf until June 1995, when they returned to Norfolk, Virginia.

In lieu of flowers, memorials may be made to Alpena VFW Post #2496 and Honor Guard.

To order memorial trees or send flowers to the family in memory of Ret. GySgt Lawrence Marchlewski, please visit our flower store.