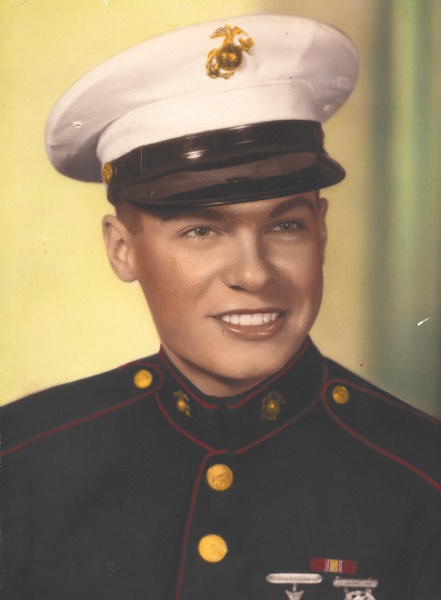 Raymond R. “Ray” Strohschein, 87, passed away peacefully surrounded by his loving family on July 13, 2022. Ray was born May 5, 1935, on the family farm in Royston, Michigan to Herman Strohschein and Victoria (Wolter) Strohschein. He was the tenth child in the family. His mom died when he was only a year old, but Ray grew up surrounded by the love and guidance of his many siblings.

Growing up in a small town, Ray always dreamed of seeing the world. In August of 1954, he made the decision to join the United States Marine Corps. That decision changed his life in so many wonderful ways. His 20 year military career took him to numerous duty stations including, North Carolina, Okinawa Japan, Vietnam, The Philippines, Puerto Rico, Cuba, Hawaii, and Southern California. Due to his strong work ethic and dedication to the USMC, he advanced quickly in rank to Master Sergeant and then to Captain.

Ray married his hometown sweetheart Janet Crawford at St. John Lutheran Church in Royston on September 22, 1956. Over the next several years, they welcomed three children to their family, Nadine, Stephen, and David. As a family, they experienced living in a variety of places until they finally settled in Oceanside, California in the early 1970’s. Ray retired from the service in 1974 and continued to live by the values and honor he learned in the Marines. After his retirement, he ventured into the public sector, eventually owning a successful crane business that served the greater San Diego County. One of his many customers included the San Diego Zoo and Wild Animal Park, where he had the unique experience of unloading the park’s first rare white Rhinos. Ray will be remembered as a loving husband, father, and grandfather, as well as a hard-working, kind, generous, honest, and honorable man who left a mark on all of the lives he touched.

Visitation will take place Sunday July 24, 2022, at St. John Lutheran Church in Royston from 2-6 p.m. and continue there Monday from 10 a.m. until the funeral service at 11 a.m. with Rev. Jason Mandley officiating. Military honors will be accorded him by VFW Montmorency Post 2656 and the US Marine Corps.  Arrangements have been made by the Bannan Funeral Home.

In lieu of flowers, donations can be made to St. John Lutheran Church preschool in Royston, Michigan. The family would also like to give a heartfelt thanks to Hospice of Michigan and the VA Home Care team for providing wonderful and loving care to Ray and his family.

To order memorial trees or send flowers to the family in memory of Raymond R. Strohschein, please visit our flower store.