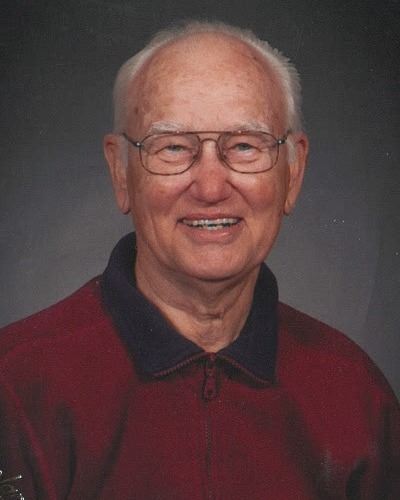 Marvin Hopp of Alpena, age 94, left this temporary earthly life to be with the Lord in the heavenly home on January 3, 2023, with his wife by his side.

Marvin was born to the late Arthur and Emma Hopp in Rogers City on February 20, 1928. In 1951, Marvin married Ellen M. Grulke of Rogers City and his dear wife for 71 years. They were blessed with three daughters, Deborah J. Smith of Arizona, Susan Harris, and Carol Sudut (husband Tony) of Livonia.

Marvin attended St. John Lutheran School in Rogers City and was a graduate of Rogers City High School in 1946. He then graduated from Concordia University, River Forest, Chicago in 1951 and began his teaching career in Detroit, Michigan. After teaching in Lutheran schools for seventeen years, Marvin and his family moved to Alpena in 1968 where he taught in the public school system for an additional 22 years.

Marvin enjoyed serving his Lord in many Lutheran churches and schools. He spearheaded the campaign as project coordinator of the Immanuel church building in 1993.

He and his wife Ellen enjoyed traveling to various parts of the country and attending numerous sporting and entertainment events in Michigan.

He enjoyed God’s creation in many outdoor activities: gardening, fishing, hunting as well as traveling and attending family and church gatherings.

Visitation will take place Friday at Bannan Funeral Home from 5-7 p.m. and continue Saturday at Immanuel Lutheran Church from 10 a.m. until the funeral service at 11 a.m. with Rev. Joshua Schultz officiating.

Interment will be held in the spring at Pilgrims Rest Cemetery.

To order memorial trees or send flowers to the family in memory of Marvin Hopp, please visit our flower store.