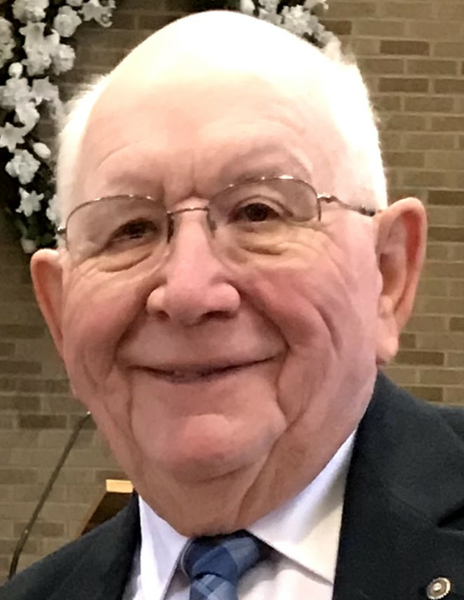 Alpena lost one of its dedicated sons on April 2, 2020 when James Ernest Arbuckle passed away in Florida.

Born to Ernest and Averil (Bates) Arbuckle on November 23, 1939, Jim worked for M.P. Rosenthaler and Co. while in high school. After graduating from Alpena High School in 1957, Jim proudly received a Business and Industry Scholarship, enabling him to continue his education. Upon receiving his Associate degree from Alpena Community College in 1959, he moved to Detroit to attend Wayne State University and worked for CPA firm Baditor and Segroves. After receiving his Bachelor of Business degree in 1962, Jim returned to Alpena and worked at Reitz and LaFleche. He became a CPA and was a member of NAA (National Association of Accountants).  Jim joined Besser Company in July 1967. He served in increasing levels of responsibility, starting as controller, advancing to chief financial officer, retiring as vice-chairman of the company in November 2003. He was elected to the Besser Board of Directors in 1984.  Jim was instrumental in merging several manufacturing sites into the Besser family during his tenure.

Jim met his beloved wife Andrea at an Alpena Civic Orchestra rehearsal in the fall of 1964 and they were married on July 2, 1965.  During their nearly 55 years together, they welcomed 4 children: Lisa (Jeff) Mulholland of Shelby Township; Cindy (Tim) Feldpausch of Owosso; Patty (Dan) Ruckman of Coldwater, Ohio; and Brian (Agnes) Arbuckle of Novi and 12 grandchildren: Adam and Andrea Mulholland; Sam, Ellie, Owen, Isaac and Lily Feldpausch; Anna, Jillian, and Isabelle Ruckman; and Madeline and Claire Arbuckle. The family enjoyed weekend camping trips to Michigan campgrounds for many years. Jim was an avid golfer and captained the pontoon boat while his grandkids went tubing and waterskiing on Long Lake.

Jim gave back to his community in many ways over the years.  When he saw a need, he tried to fill it—even if that meant learning how to skate in order to coach a youth hockey team. Jim belonged to First Presbyterian Church and was a devoted member, elder, past choir director, past treasurer, Benevolent Foundation member, member of Presbyterian Men and past chair of the Pastor Nominating Committee.  He played viola in the former Alpena Civic Orchestra and the current Alpena Symphony Orchestra, serving as Treasurer and Chairman of the Fundraising Committee.  Jim was a member of the Besser Male Chorus for over 25 years, spending 5 years as director. As education was very important to Jim, he served on the Alpena Public School Board (former president), Band Boosters (past president) and Alpena Community College Foundation. Jim supported the Jesse Besser Museum (board member), Optimists Club, Alpena Country Club (past president) and Rotary Club (past president). He was honored to be named a Paul Harris Fellow by Rotary and to be inducted into the Alpena High School Hall of Fame. Jim served on the Alpena Regional Medical Center Board and the boards of Mid-Michigan Health, both locally and for a time in Midland.

Jim is survived by his wife, children and grandchildren, his brother Gordon (Barbara) Arbuckle of Standish and many nieces, nephews and cousins. He was preceded in death by his parents, his brothers Walter, Warren and Austin Grace and his sisters-in-law Fern Grace Bryan and Thelma Grace.

Memorial visitation will take place Saturday, July 25, 2020 at First Presbyterian Church from 1 p.m. until the memorial service at 2:30 p.m. with Rev. William Rayment officiating.  Arrangements have been handled by the Bannan Funeral Home.

To order memorial trees or send flowers to the family in memory of James Arbuckle, please visit our flower store.