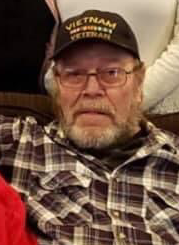 Henry Lee Cadarette was born in AlpenA on February 12, 1948, to the late Henry and Clarise (Kramer) Cadarette.  He served in the United State Army during Vietnam War returning to Alpena where he owned and operated Cadarette Construction for many years.  Henry along with his mother, Clarise owned and operated the Maplewood Tavern until most recently.  He enjoyed wrenching on cars, collecting guitars, and playing in numerous local bands for many years.  He enjoyed Legend Car racing and was a lifetime member of the VFW Alpena Post 2496.

Henry was preceded in death by his stepfather, Julian Grzenkowicz and a stepsister, Shirley Grzenkowicz.

A celebration of life for Henry will take place at a later date.  Cremation arrangements have been handled by the Bannan Funeral Home.

In lieu of flowers memorials may be made to the Alpena County Animal Control.

To order memorial trees or send flowers to the family in memory of Henry Cadarette, please visit our flower store.