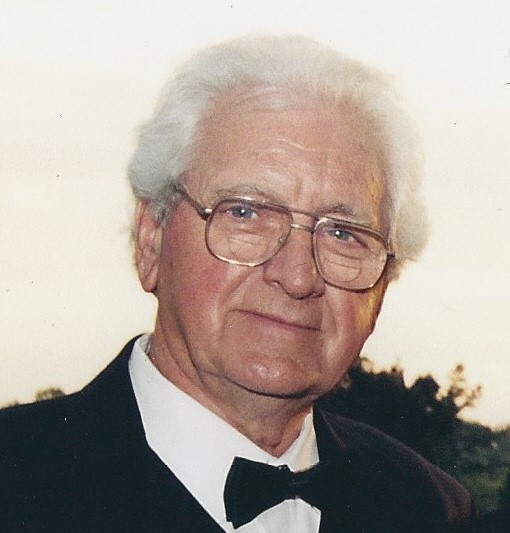 His Lord and Savior collected George Albert LaFleche  on March 18, 2022, in Alpena, Michigan.

George lived a life filled with integrity, honor and laughter. He loved to drive, a passion that began when he was 16 and drove a school bus for the Hillman area. He was affectionately known as “low flying aircraft” when he was behind the wheel of his preferred Ford vehicles. George was loved and known for his great sense of humor and optimism. He enlisted in the United States Army during WWII and served in the Philippines. After his honorable discharge, he returned home and married that cute Krueger girl from Hawks, Dorothy. George was trained by the United States Army on the GI Bill as an accountant and began working for the IRS in Detroit. He and Dorothy relocated to Alpena where he worked for Marx Rosenthaler as a CPA.  Marx remained his mentor and model of business success all his life. He purchased the firm and went into business with Carl Reitz, forming the Reitz and LaFleche accounting firm. During his time at that business, he hired Jim Boldrey, a great friend all his life. In 1972, he and a group of investors purchased Thunder Bay Manufacturing to save the company and the jobs it provided for the community.  He worked actively in that business until selling it in 2007. George and Dorothy were fortunate to be able to travel widely, over the years seeing most of the countries of the world. He  was an avid hunter, a member of the Smoky Hollow Hunt Club for over 50 years and a founding member of the Alpena Country Club.

During his life, he was named Citizen of the Year along with his wife Dorothy by the Chamber of Commerce, named a Paul Harris fellow by Rotary International, was honored with a fellowship by Alpena Community College and was a Keystone Society member for MidMichigan Regional Medical Center in Alpena. He was known and honored for his philanthropy and support of education and medical services in the area.

Memorial visitation will take place at Immanuel Lutheran Church on Saturday, March 26, 2022, from 10 am until the time of the memorial service at 11 am with Pastor Mike Potter officiating. Military honors will be accorded him by VFW Alpena Post 2496.  A luncheon and fellowship will follow.  Per his wishes, his remains have been cremated after a private family visitation.  Arrangements have been handled by the Bannan Funeral Home.

In lieu of flowers, memorials may be made to: MyMichigan Health Foundation, the Alpena Community College Foundation or Feeding Kids Ministry.

To order memorial trees or send flowers to the family in memory of George Albert LaFleche, please visit our flower store.