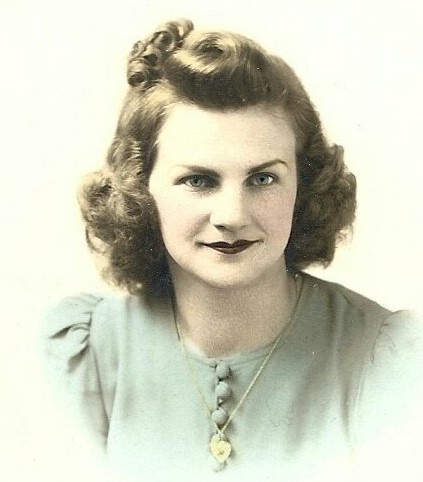 Clara Ann Hubert, 98, passed away peacefully, while holding her daughter's hand, on Thursday, July 29, 2021, at her daughter's home in Presque Isle.  Clara was born on July 3, 1923, in Presque Isle County, the daughter of Joseph and Mary (Wasylk) Paul.  Clara attended St. Mary Catholic School in Alpena. She was a lifelong member of St. Mary Catholic Church.  As a young woman, Clara worked at the Alpena Candy and Cigar Factory as well as Marks'

Women's Apparel Shoppe. Clara and Lawrence "Larry"  E. Hubert were married on October 29, 1949, at St. Mary Catholic Church in Alpena with the Right Rev. Monsignor John E. Gatzke officiating.  In 1956, Clara became a stay-at-home mom, caring for daughter Jeannie. Clara was a crafter, a reupholsterer, and a ceramics painter. Since 1962, Clara and Larry spent summers at their Grand Lake cottage, and, in later years, they spent winters in South Texas and the Florida Keys.  Clara was an avid garage "sailor," and woe to whoever drove passed a garage sale sign.

Macular degeneration took most of Clara's eyesight, limiting her crafting hobbies completely; however, she still enjoyed sitting on the porch listening to the birds sing, listening to cello music as well as big bands of the 1940s, and listening to All Saints Holy Masses on YouTube. Clara and Larry are together again, dressed to the 9s, and dancing to "their song" -- Stardust.

Clara's family will receive family and friends at the Bannan Funeral Home on Wednesday, August 4, from 3-7 pm with a prayer service at 6:30 pm.  Visitation will continue at St. Mary Church of All Saints Parish on Thursday, August 5, from 10 am until the Mass of Christian Burial at 11 am with the Reverend Tyler Bischoff officiating.

To order memorial trees or send flowers to the family in memory of Clara Hubert, please visit our flower store.