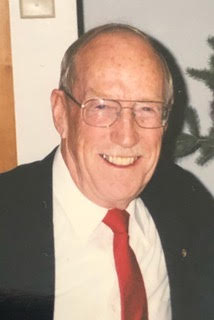 Burton Lovell Wright, age 93, passed away peacefully on Wednesday, May 22, 2019 at Robin’s Nest Adult Foster Care in Caro, Michigan. He was born on August 12, 1926 in Pontiac, Michigan to Beatrice (Cooper) Wright and Vern Wright.

Burt’s childhood was filled with boyhood fun and Depression-era challenges while growing up in rural Fairgrove, Michigan.  At age 18 and having graduated high school, Burt enlisted into the Navy at the end of WWII. For a farm-boy from rural Michigan, the Navy brought South Pacific adventure and contact with entirely new cultures. Burt returned from the service and graduated from Central Michigan University in 1950 with a bachelor’s degree and a teaching certificate. During his junior year, he met Naomi, “Toni” Barret, “a neat gal with saddle shoes”, and, June 16, 1951, they were married in Detroit, Michigan. Together, they raised three children and enjoyed lifelong careers as educators.  The beloved and large group of friends that Toni and Burt enjoyed in Alpena were considered their extended family.

Burt had a successful 35-year career in the schools, which began with a teaching position in the Flint Beecher School District and ended with his retirement in 1985 as the principal of Ella White Elementary School in Alpena, Michigan. Becoming an educator was likely spurred by his genuine delight in the everyday antics of children.  Whether it was his own or random children encountered in his travels, their words and actions could bring an instant smile.

Burt was an active community leader and volunteer, serving on the board of the George N. Fletcher Public Library in Alpena and in leadership positions of the First United Methodist Church, Lions Club, Habitat for Humanity Northeast Michigan, and the Alpena Carver’s Club.

Burt was predeceased by his wife, Toni.  He is survived by his three children: his daughter, Susan of Caro and her two children, Scott (Leanne) Chambers of Chicago and Saira Chambers of Chicago. His two sons include Tim (Paula) of Gladstone, Michigan and their two children, Emily (Kevin) Calhoon of Boyne City, Michigan and Aaron Wright of Grand Rapids and son, Jeff (Julie Omelchuck) of Portland, Oregon, and their two children Lena Wright and Dylan Wright of Austin, Texas. Also, four great grandchildren, Dahlia Chambers and Luke, Hannah and River Calhoon.  Burt’s brother, Cal, lives in Fairgrove, Michigan.

Memorial visitation will take place at Bannan Funeral Home on Friday, August 16, from 4-7 p.m. and continue Saturday at First United Methodist Church from 10 a.m. until the memorial service at 11 a.m. with Rev. Seok Nam Lim officiating.

The Wright family would like to express appreciation to Care Team Hospice for their thoughtful and helpful care of Burt during his final months. Donations in memory of Burt can be made to the George N. Fletcher Public Library and First United Methodist Church of Alpena.

To order memorial trees or send flowers to the family in memory of Burton Wright, please visit our flower store.