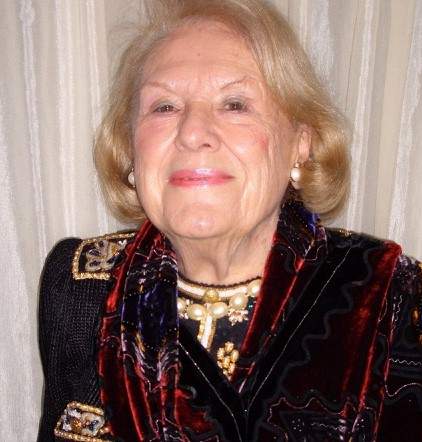 Mrs. Hinks was born with a pioneer spirit. She was named Miss Aksarben in her hometown of Lincoln, Nebraska. She was a successful businesswoman and involved herself in community affairs early on. Organizations she has belonged and contributed to are Alpena Community College, where she often lectured as an art historian, Alpena Community College Foundation Board for over 25 years, Association of Lifelong Learners, where she donated her time to sharing her love of art and the old masters, Trinity Episcopal Church, Alpena Women’s Shelter, Lawyer’s Auxiliary of Alpena, Daughters of the American Revolution, and Ladies Shrine.

Mrs. Hinks opened her home on many occasions for fundraisers for state and local officials. She remembers also inviting 5th graders from Hinks School into her home where she poured tea and provided a look into a time shared long ago. As a result of her generosity and community spirit, Mayor Carol Shaft, declared July 4, 2010 as Avis Hinks Day. One of her fondest memories was being honored by the Zonta Club and named Woman of the Year in 2005. A music scholarship fund in the name of Avis Blenderman was begun over 15 years ago at Alpena Community College in honor of her mother. Like true leaders everywhere, she felt honored and privileged to work in all her efforts with the high quality and dedication of those she has worked with.

Avis loved Alpena and was dedicated to her community. Her last few years have been spent at Turning Brook assisted living facility. The loving care she received there from dedicated staff, as well as, from Hospice gave her a wonderful quality of life. Together they are so appreciated! She will be missed by many who have loved and known her. Mrs. Hinks’ infectious smile and laughter lit up a room.

A private graveside service has taken place at Evergreen Cemetery with The Very Reverend William J. McClure, Jr. officiating.  A funeral service will take place at Trinity Episcopal Church at a later date.  Arrangements have been handled by the Bannan Funeral Home.

In lieu of flowers memorials may be made to Hospice of Michigan or Trinity Episcopal Church.

To order memorial trees or send flowers to the family in memory of Avis Hinks, please visit our flower store.